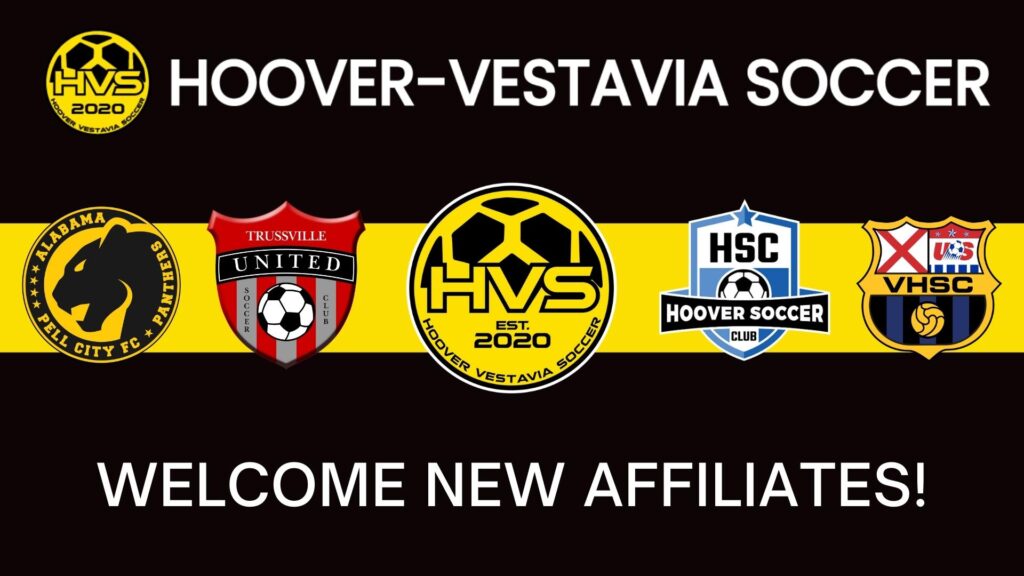 This opportunity will enhance both programs by having additional resources available from HVS to service the exceptional players that TUSC and PCFC develop.

Trussville United President Eddy Nalley says, “Over the past decade the soccer landscape in the Birmingham metro area has drastically changed. With the introduction of several new high level programs Trussville United has not been able to provide a similar pathway to compete at such levels. This affiliation  will provide our players a chance to compete at a much higher level without having to leave their community club and friends to do so.”

Pell City Executive Director Shane Bell says, “We are very excited about our affiliation with HVS. Pell City FC’s primary focus is to develop our players to be competitive on top-level teams. By working with the staff and coaches of HVS, we are taking additional steps to help our players transition into the next level of soccer.”

HVS Director of Coaching Mike Getman states, “We are very excited to affiliate with Trussville United and Pell City.  They have great programs with fantastic coaches and players.  Working together I am confident we can help even more players reach their goals.”

The HVS Affiliate Program allows players to return to their clubs for regular season matches, State Cup, Regionals, and tournaments. At the same time, it allows the affiliate clubs to provide a pathway to higher competition. Additionally, all affiliated clubs are provided coaching clinics and special topics player sessions, at their venue- staffed by HVS staff.

HVS is dedicated to the development of top-class youth players in the state of Alabama. Many professional and U.S. National Team players have come through the Hoover and Vestavia Hills Soccer Clubs, including Chris Richards, Brandon Servania, and JJ Williams.

To sign up for tryouts, view our FAQs, and for more information on HVS, visit: www.hoovervestaviasoccer.com

To interview someone from HVS, contact Heather Jeffcoat by emailing [email protected] or calling 205-515-1972.